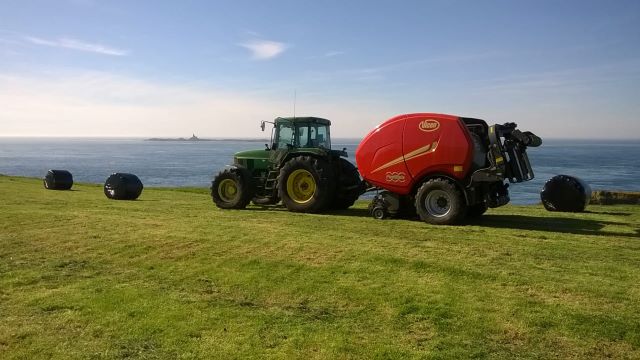 Achieving a consistent non-stop output when baling and wrapping silage is preferable to one that involves repeatedly stopping to finish each bale.

That’s the viewpoint of Anglesey-based farmer and contractor Dei Owens, who switched to a Vicon FastBale three years ago supplied by local dealer DJS Hydraulics, replacing a baler and trailed wrapper combination.

Notching up an impressive output of 10,000 bales/year, he says the process of continuous baling and wrapping is one that has bought him time.

“I never had time to stop and eat my sandwiches when I towed a wrapper behind my baler,” he says. “I had to keep going to make sure that no time was lost. It was always so intense.”

“Now, non-stop baling and wrapping is such a superb solution,” he says. “It’s easy to see where the efficiency gains come from, and the amount of time saved each day, is considerable.”

Working from the 35-acre Bryn Awelon family farm, near Cemaes, Anglesey, Dei’s day involves twice-a-day milking with his 24-cow herd, along with tending to other livestock and farming duties. So anything that can make his day more efficient, is high on the priority list.

“I’ve been baling on the Island for over 25 years, and a lot of my customers are friends,” he says. “So it is important that the trust is there to get the job done as efficiently and productivity as possible – and often before the weather changes.”

Field sizes across the rugged landscape vary considerably, from small paddocks to around 12 acres, and everything in between. And very few are flat.

“I love baling, it’s almost become a way of life for me,” he says. “Though the island terrain throws up some challenging conditions, and you do need to be aware of your surroundings.”

Used with a modern classic - a 140hp John Deere 7700 – Dei prefers to have the baler in charge of the tractor, rather than have an excess of power.

“This way, I’m not winding a whole lot of power and torque into the machine, but I do make sure that every bit of engine power and hydraulic performance are being used,” he says. “It’s also about what I feel through the seat, too,” he adds. “And the joy of using manual or auto controls, makes baling and wrapping a very satisfying job.”

Depending on the weather, baling days can be as few as a dozen in a paddock, or extend to over 500 through numerous fields and locations.

“With the FastBale, I know that I can go out and confidently produce over 500 bales for my customers,” he says. “And with a pre-chamber and a main chamber, the FastBale makes superb bales. They are tightly packed.”

Get in touch! Vicon dealers are ready to support you