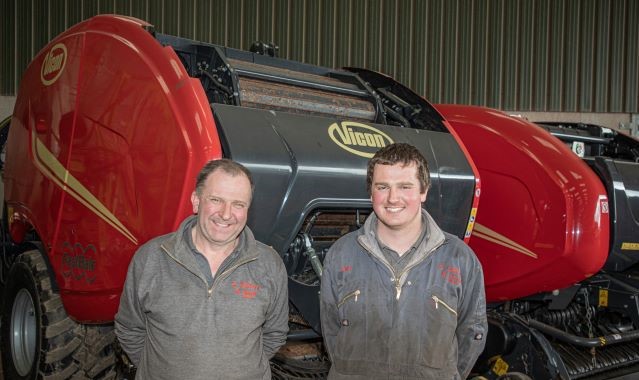 Having completed four seasons and clocked up over 40,000 bales with his Vicon FastBale, Nottinghamshire contractor John Clifford says that there’s no going away from this innovative non-stop baling and wrapping solution.

“The FastBale is simply immense,” he says. “Compared to traditional round baling and wrapping processes, this just keeps on plugging away, bale after bale, after bale.”

D Clifford & Sons Agricultural Contractors based at East Bridgford, Nottinghamshire, has been involved in round baling and wrapping for over 30 years, and sees the non-stop process as a huge benefit to the business.

“There’s no need to repeatedly charge about and stop; you keep going at a steady pace with the FastBale, which means there’s time to sit and watch what’s going on,” he says. “So there’s less fatigue, I’m more relaxed in the cab, and I don’t go home as tired.”

“This machine is effectively two balers and a wrapper, in one. And it just keeps going.”

John and his son Sam often work together when baling, with Sam running a 9m twin rotor rake preparing swaths.

“It’s hard to get far enough ahead of Dad when he’s on the FastBale,” says Sam. “He might only be doing 6 or 7kph, but where a conventional baler keeps stopping to apply net and unload the bale, he just keeps on coming. And having used it myself, I can see where the extra productivity comes from.”

The Cliffords’ say that 100 bales/hour is a spot work rate frequently seen, but field size and swath density do have an influence on output.

“Every season is different, and we’ve had to learn how to adjust our silage making processes to get the best from non-stop baling and wrapping with a fixed chamber baler,” explains John.

“The FastBale’s pre-chamber piles on the density, before the bale is swapped to the main chamber for completion,” he adds. “The bale it produces is comparable to a variable baler in weight.”

He says that the added benefit of not needing to stop to apply net and transfer the bale, adds up to a considerable productivity boost during the day.

“When we’re not so busy, it also means an earlier finish,” adds John.

“You never get time back - so it’s important to save where you can and enjoy what you do,” he says. “FastBale has definitely been a game changer for our business. It is the ultimate in baler-wrapper combinations, and I’m looking forward to silage season again this year.”

Get in touch! Vicon dealers are ready to support you